Upwards growth in the city

A wildlife garden in the middle of the city

It all started around the age of 30 when Julie helped her ex partner and his mum to look after an allotment. At that time, she knew almost nothing about gardening, but with a constant desire to help, she knew that with it being a large space they would need as many hands as they could get.

The allotment where it all started

The more time she spent at the allotment, the more she learnt about growing fruit and vegetables and very quickly gained a huge sense of satisfaction from planting a seed and only a few months later, adding it to a meal she would share with others. "There were oftentimes that a whole meal comprised of things that were from our allotment and the difference in taste to foods that were shop bought were incomparable especially finding sweetcorn, tomatoes, carrots and potatoes particularly tasty."

Four years into working at her city based office, Julie happened to learn that there was a green space on the roof. It came about when a colleague, having heard about Julie's gardening knowledge, approached her to ask her advice about what plants would be best grown at that time of year. Julie was of course happy to help and it was at that point that she found out that the reason for the enquiry. There was a space on the roof, 8 floors up, that had been previously used by the canteen chefs.

There were oftentimes that a whole meal comprised of things that were from our allotment.

The chefs had started to grow herbs and potatoes but rapidly realised that they needed much more time and expertise given they were catering for 500-600 people a day and as a result, it was reluctantly abandoned.

After a little research and gaining permission from the building manager and firm, they both started to go up to the roof regularly, utilising some of the abandoned pots and materials to start a small garden. "Eversheds Sutherland had always been so supportive and were very willing to ensure that materials and equipment was supplied." In the new year, her colleague left the company but rather than deterring her, Julie continued alone.

By pure coincidence, one day Julie's colleague Marta asked if she could go up to the roof at lunchtime. Marta knew very little about gardening and didn't have a garden herself. As soon as she stepped foot into the garden, she instantly knew that she wanted to get involved and soon after, she too got the bug. Ever since, they have both been maintaining the garden together.

Unlike the allotment where things were grown for productivity and abundance to eat, up on the roof, fruit and vegetable are grow more for pleasure, experimenting with new plants and inviting as much wildlife as possible. "For us, it's all about reusing what we can, using the pots and equipment that was already there, planting in tin cans and composting where possible. We realised that we wanted to encourage insects and birds into this city space. We do our best to be resourceful and reuse what we can".

The space is amazing with 360 views over the city. The majority of the roof is sedum and wildflowers to encourage bees and other insects with only a very small area dedicated to growing edibles. "The space is easily accessible so we often get visits from our global colleagues, clients and senior management.It's is a wonderful space that adds value to not just us, but can also a way to showcase how wildlife and sustainable gardening can be done all over, no matter where the space is. 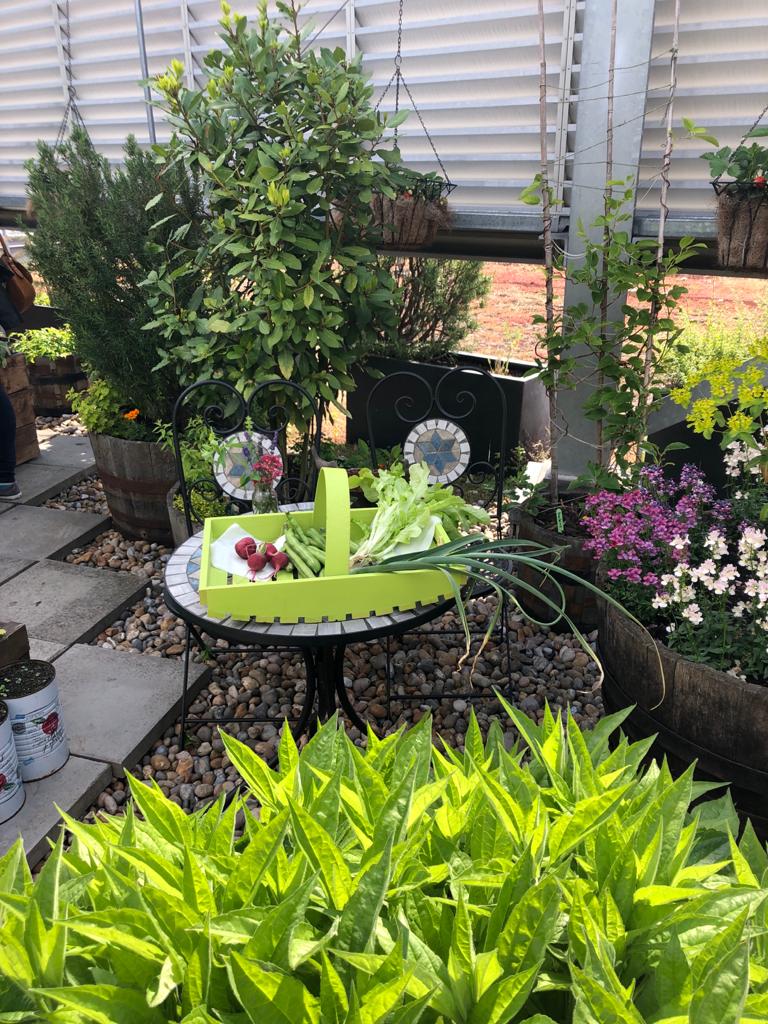 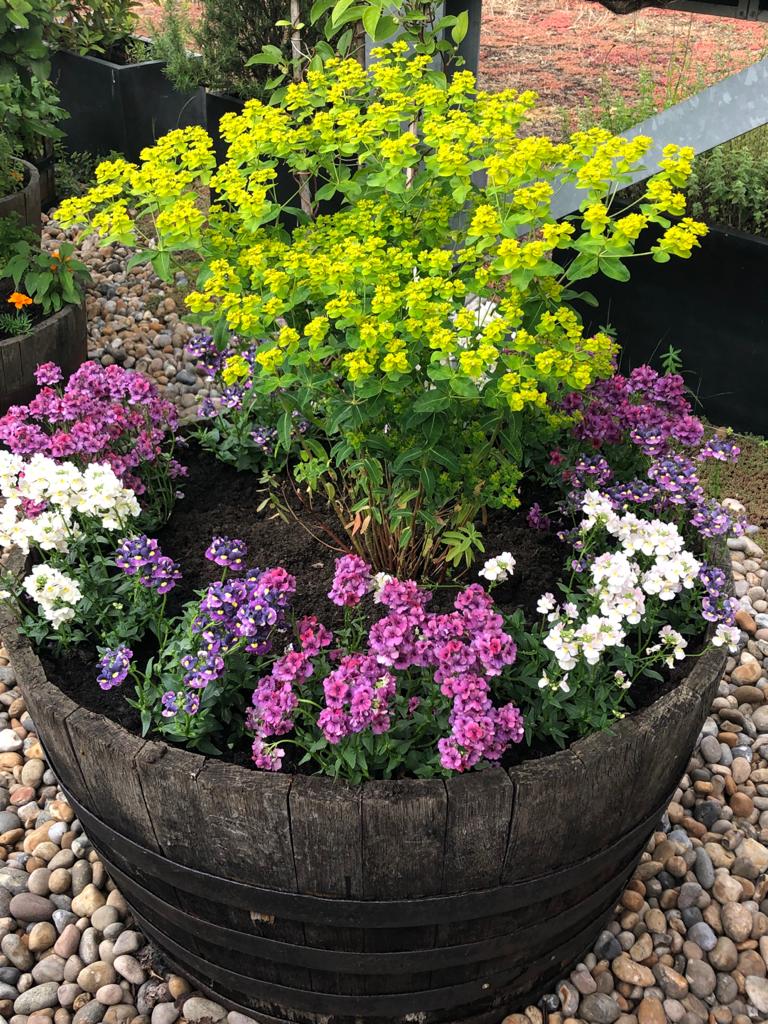 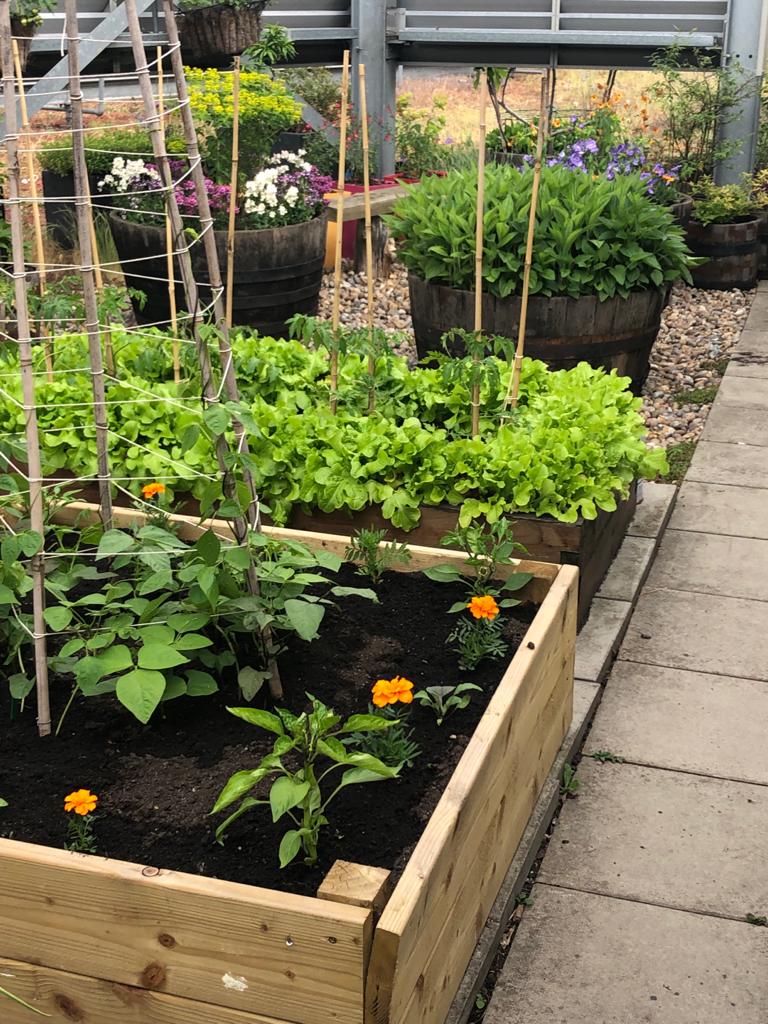 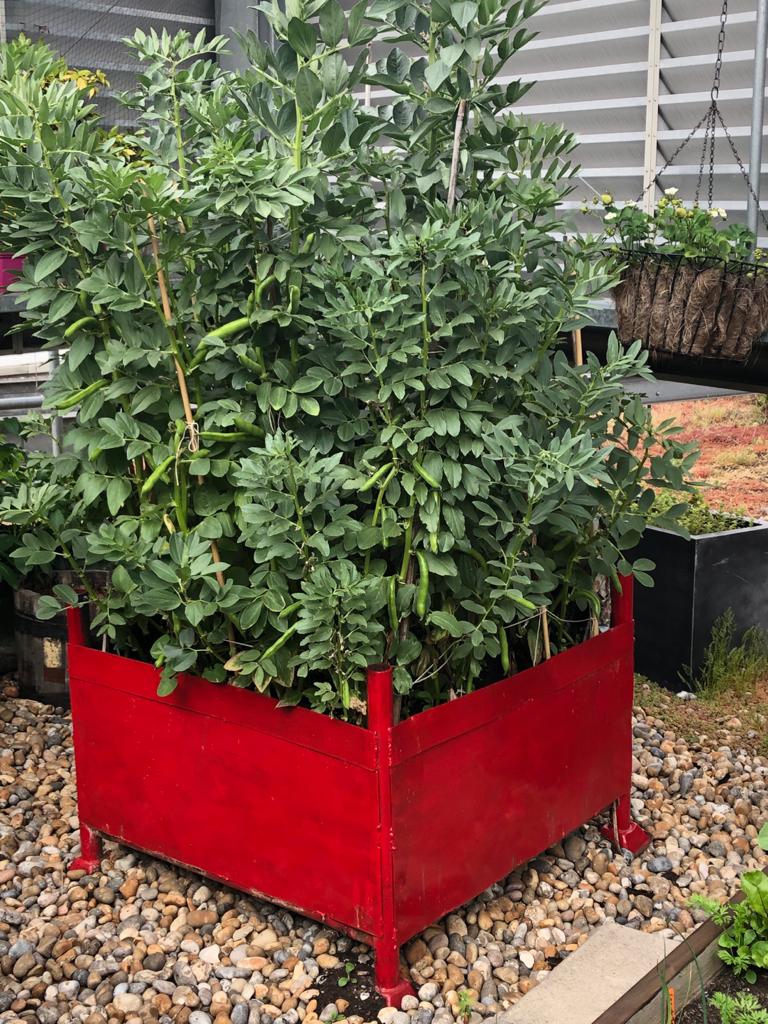 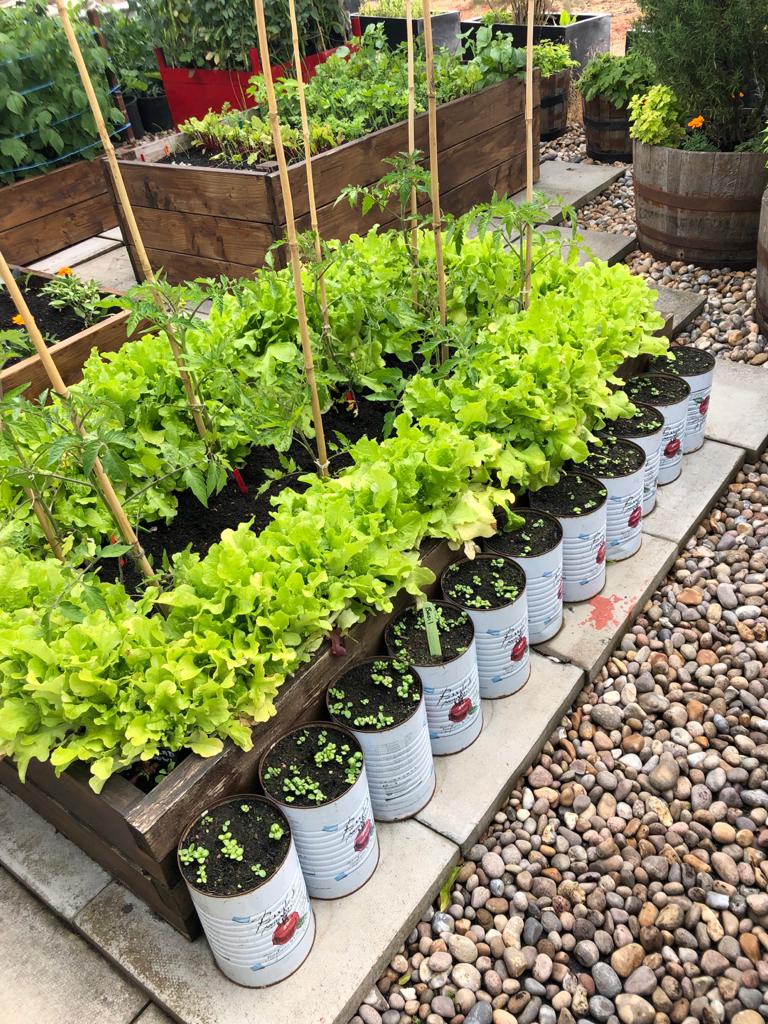 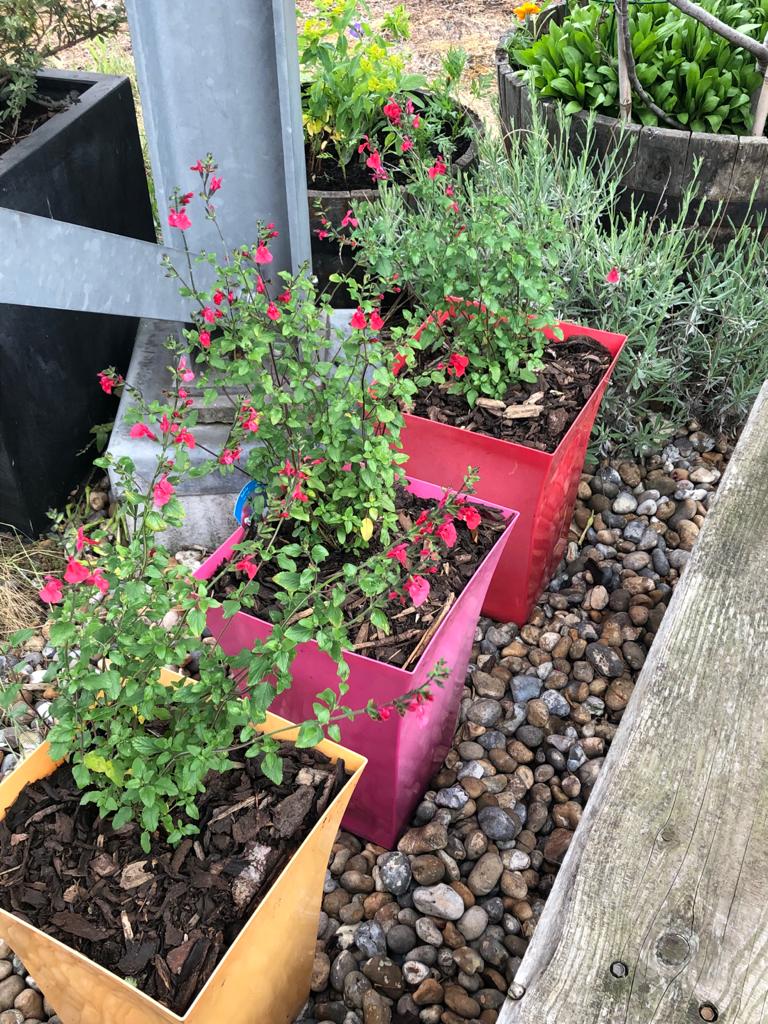 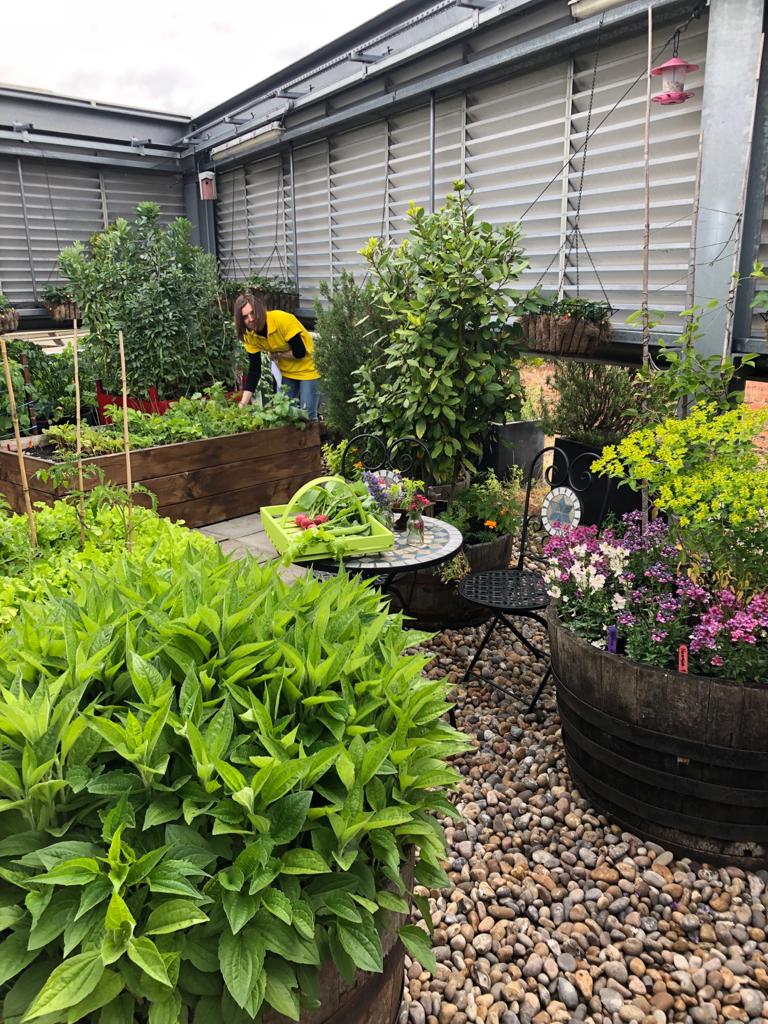 We realised that we wanted to encourage insects and birds into this city space. We do our best to be resourceful and reuse what we can.

Around 2014, the organiser of City in Bloom had requested access to the roof of our building in order to carry out a bird survey. Upon seeing the garden space, they invited Julie and Marta to their annual awards event at the Inner Temple. "I went because I thought it would be lovely to attend and we had never been to the location so were excited to see what it was like. Turns out that we ended up winning an award! We were so surprised as we weren't expecting anything!"

For several years after that, they entered City in Bloom and upon hearing about the Open Gardens Square Weekend they were encouraged to take part in that too.

Open Square Gardens Weekend takes place over 2 days and is organised by London Parks & Gardens Trust with more than 100 outdoor spaces taking part last year. It highlights some of the best gardens and green spaces that make up the rich tapestry of London’s green infrastructure.

...we ended up winning an award!

"It is such a wonderful weekend. It is a lot of work, but is so satisfying. We have been getting around 2,000 visitors over the 2 days and people are always so interested in finding out more, asking so many questions and taking a real interest in what we do. Once I spoke with someone who was proudly telling me how he had returned for the second year in a row when a man behind him chipped in saying "well that's nothing, I was here yesterday!!". It really is great to see so many people enjoying the space we created."

There is always more that can be done

"Most plants have been chosen because they are bee-loving. For the whole time I have been gardening at the office, there have been hives on the roof. It's not something we get involved in. Eversheds Sutherland have been so encouraging and really supportive of what we do and understand how important it is to have this space. They have offered apiarists courses to anyone who is interested and now 2 staff members look after the hives."

In 2017, City in Bloom launched 'get green in 2017' and as part of it, they were encouraging people to grow plants which would purify the air. "I put a proposal together to turn the space at the front of the building into a planted area. This was accepted and contractors come in throughout the year to keep it maintained. It's wonderful to have a space that looks welcoming whilst also helping the environment."

It is understandable that not all roofs are accessible however, green roofs are brown roofs can be hugely beneficial and low maintenance. In France, rooftops on new buildings in commercial zones must be partially covered in plants or solar panels.

There is so much roof space across London that it would be so beneficial to utilise as much of it as possible and until we can follow France's lead, we definitely need more people like Julie and Marta!

Where can I start?

If you work somewhere with a unused space that you think could be turned into a garden or a green roof and want to approach your company, have a think about the best ways to sell the idea.

No garden, no problem try garden sharing or find your local allotment here.

Julie is a PA at the global legal firm, Eversheds Sutherland, just a short walk from Cheapside, with St Pauls being a near neighbour.

All photos have been provided by Julie.

From fear to friends

The beauty of a common weed